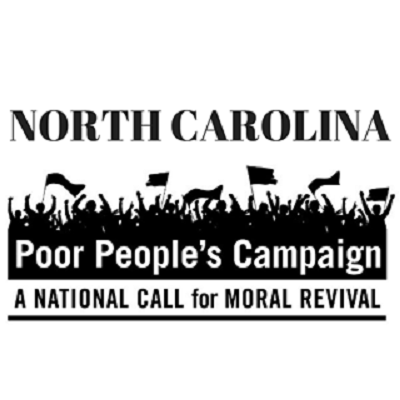 Where: Hal Marshall Annex (sidewalk, could be moved to the parking lot where the parades initiate) 618 N. College St., Charlotte, NC 28202

The Stories of the Homeless and Those Impacted by Gentrification

The emergency is not at the border!  It is throughout our so-called  “Great country”.  There are more than 30 states that are having statewide bus tours in our attempt to highlight the violence of poverty, systemic racism, ecological devastation, and the war economy.  We are here to correct the moral narrative and expose the “true America!”  We are crying out the pain that we are suffering while the country is spending a trillion dollars on the war economy.

Our North Carolina “Emergency Truth and Poverty Tour” will occur during the days of April 27 thru May 1.  Thousands will mount on Raleigh for a mass rally.  Our North Carolina tour includes 7 stops which highlight Healthcare, Homelessness and Gentrification, Systemic Racism, Voter Fraud, The Environment, and the Hog Wash Farms and several other dangers that we endure on a daily basis.

On Saturday, April 27th our bus will depart Ashville, at 12 noon, and will be headed to Charlotte.  We are here to lift those up that are homeless and impacted by gentrification.  We will be hosting a mass rally, which begins at 2:00 pm and we will be cheering the bus on as it arrives in Charlotte around 2:30 pm – 3:00 pm.  We will have our impacted people share their stories of being homeless and pushed out of their neighborhoods.  Rev. Leslie Oliver will lead our movement songs.

This rally will be held at the Hal Marshall Annex (sidewalk; subject to change to the parking lot).  Hundreds are expected to join our rally.   Our bus will then tour the Men’s Shelter and a west side community.  Stories will be shared on tour. The tour times are from 3:45- 6:15 pm. The heroes of Charlotte will be crying out that we must end homeless and gentrification now!  On Sunday, April 28th Caldwell Presbyterian Church will be hosting a breakfast for those planning to travel on to other stops throughout the state.  Our bus will depart from Charlotte on April 28th on our way to Greensboro.

National and state media will accompany us throughout our tour and we cordially invite all local media sites to witness and share the pains that the citizens of Charlotte are enduring.  Thank you for your assistance in covering this historic tour.